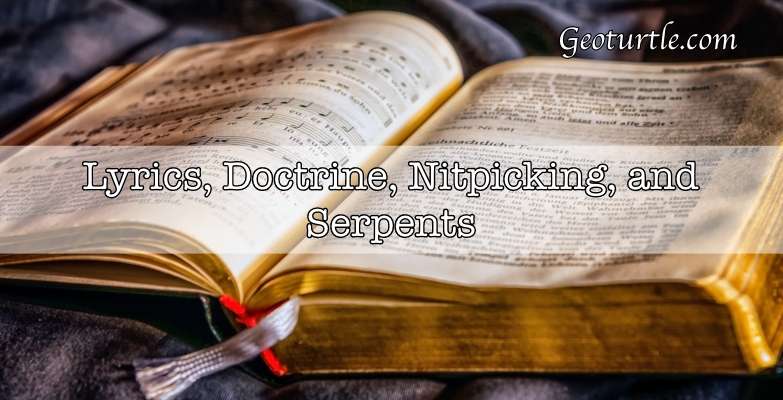 Lyrics. It’s such a huge part of life in general. We’re constantly surrounded by music, songs, agendas, propaganda, vibes and melodies. How often do we consider the words and meanings being fed into our minds?

(Disclaimer: this is my opinion and thoughts. They are not in any way intended to bash/offend you. If you are convicted, take it to God, otherwise, just move along. :D)

I think about what I’m listening to a lot. All the time. My brain is half packed with memorized song lyrics, both Christian genre and secular.

But I try to be so careful.

I know there are some songs that will stick themselves into my head like a burr and run on repeat. And they aren’t always good songs.

My secular music is limited quite a bit to what I know to be clean, mostly oldies that my dad plays a lot, as well as a couple of songs from cartoon etc. etc.

But that’s not all. So many times in life people will slip under the banner of things labeled “Christian” and think it’s all innocent perfection. Guess what? It’s not. Not only are we all humans, but our Enemy also knows that there’s not much quite as powerful as a little lie with a lot of truth.

Jesus says in in Matthew 10:16 “Behold, I send you forth as sheep in the midst of wolves: be ye therefore wise as serpents and harmless as doves.”

He also says in Matthew 7:15 “Beware of false prophets, which come to you in sheep’s clothing, but inwardly they are ravening wolves.”

Innocent. Beautiful innocent things can have an underlying sickness and can bring harm.

Song lyrics are no exception. Music is so powerful. It has the power to influence our emotions, our thoughts, and in times, even our actions. Ezekiel 28:13b even suggests (read the Bible for yourself to see what God says to you) that music was in the Devil when he was first created. I wouldn’t put it beyond him to use music, something created beautiful for God to be glorified and for us to enjoy, to lead us astray and misguide us. He is so sneaky. 1 Peter 5:8 (good to memorize by the way!!!!) says “Be sober, be vigilant (be awake, be on the alert!) because your adversary the devil, as a roaring lion, walketh about, seeking whom he may devour.”

This is a warning we should definitely take to heart. God warns us to KEEP ON THE ALERT.

Now, onto nitpicking. I’m not a spiteful nitpicker. I study and search out most everything that comes into my mind and heart (Proverbs 4:23) to keep myself pure and holy for God because I feel that’s what He would want me personally to be in the alert about (especially in the world we live in).

Recently I’ve been listening to the Christian artist Nicole Nordeman. I find her voice beautiful, and her lyrics so deep. I especially enjoy her songs “Dear Me” and “Be My Rescue.” But there was one song that I fell in love with, before listing a bit closer to the words.

The song is called “Why” and is an account of the Crucifixion. I liked it so much.

(I couldn’t decide if I should post the song here or not, and decided against it. If you are interested, you can find it on YouTube)

At first, I could appreciate the way that it was portrayed from the point of view of a young girl. Then she goes onto say “And there was that Man that my dad said he loved, but today there was fear in His eyes.”

Was there? I wouldn’t take the liberty to say there was. I’m sure, being fully God and FULLY man, He would have been scared, upset, visibility distressed. But I think if anything, there would have been peace in His eyes, because He knew God had a plan, and He knew that death was not the end. Some discomfort because of what He knew had to happen but His eyes would show peace. Somehow, looking at Mark 14:61 and Luke 23:9 I don’t get the impression that there was fear in His eyes. People who are afraid don’t stand silent before accusation. They try and get out of the thing they are afraid of as quickly and frantically as they can.

That gives the idea that our Savior didn’t trust in God, because 1 John 4:18 says perfect love casts out fear.

Then it moves onto Jesus’ point of view from Him hanging on the cross in the next verse of the song:

“Father please, can’t you do something? I know that you must hear my cry. I thought I could handle a cross of this size. Father remind me why. Why does everyone want me to die?

“When will I understand why?”

And this whole thing pretty much hurt me in the heart. The first three questions are not something Jesus would ask. In John 7:7 Jesus HIMSELF says “The world cannot hate you; but me it hateth, because I testify of it, that the works therefore are evil.” Matthew 27:35 also says exactly why they cast lots for His robe and I 100% believe He knew this. It was a prophecy that was to be fulfilled by the Messiah, and so it was done, though the solders didn’t know.

Going onto the next paragraph, I believe that Jesus had already submitted Himself to the coming cross in the garden of Gethsemane, and would not have asked on the cross if God could “do something.” He had already asked that in the garden, and then said “Thy will be done.” And God’s will was for Him to die on the cross.

“I thought I could handle a cross of this size.” *gapes* who is this person to put words in Jesus’ mouth that give the completely wrong idea of who He was and how He went to the cross. Jesus was 100% following God’s will, and He KNEW He would rise from the dead. Why would He then “think” He could handle that cross (and at this point doubt that He could)? He KNEW He could, and He would. He knew the price that would come to pay for the sins of the world BEFORE He went to the cross and He KNEW He could handle it. I do not appreciate the writer putting doubt spilling from His lips as He suffered. It gives a false, VERY false, idea of how Jesus died on the cross. He went willingly, completely, aware of the cost, and He did it for love.

And again, the last two sentences, He knew EXACTLY WHY! Notice He could have very well come off the cross and left us sinners here to die in the dust and go to hell (LIKE WE DESERVE!) but He stayed. I feel if He hadn’t understood, if He had needed to be “reminded,” we would not be standing in the position of Grace like we are today.

The portrayal of God’s reply was a balance with good and bad for me:

“My precious Son, I hear them screaming, and I’m watching the face of the Enemy beaming; but soon I will cloth you in robes of My own. Jesus this hurts me much more than you know.

“But this dark hour, I must do nothing, though I’ve heard your unbearable cry.

“The power in your blood destroys all of the lies. Soon you’ll past their unmerciful eyes. Look there below, see the child trembling by her father side. Now I can tell you why

The first paragraph is well done except for the last sentence. Again, Jesus is FULLY God, just like He’s finally man, which means He knows everything, and I believe that includes the pain that both He and The Father went through in order to save us sinners.

The rest of it is good as well, except for “Now I can tell you why.” As I’d already said repeatedly. Jesus knew.

But the emphasis on telling us why Jesus had to die, for that little girl beside her father, that little girl that I feel is me, small, unable to understand it all, not even yet knowing that He was suffering for me to live, that was a beautiful reminder.

So in conclusion, the song is a mixture of beauty and mistakes. And it’s honestly sad, because the doctrine is slightly faulty. For a none believer or new believer to hear this song and take it to heart (and why wouldn’t they?) it would be misleading, giving the idea that Jesus didn’t know, hadn’t known, went half willingly, and that The Father pushed Him there, it is false.

Be careful girls what you read, watch, and listen to.

Be wise as serpents and harmless as doves.