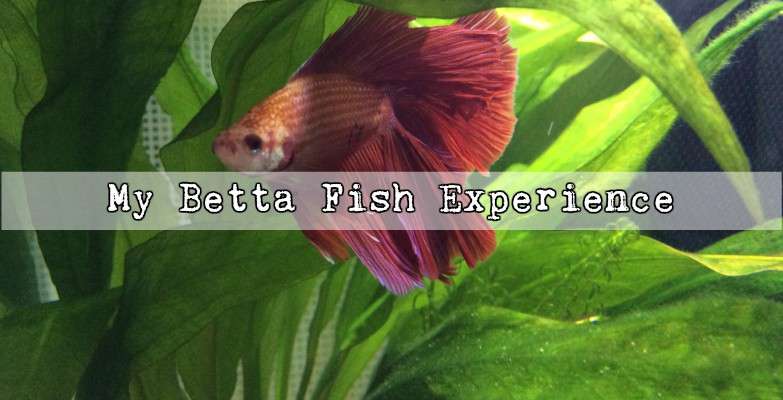 I’m being super random today and I’m just gonna tell you about all the Betta fish I’ve ever had.

Back to the very beginning my first Betta fish was a purple and pink Veiltail. When I first got him I did not know if he was a boy or a girl (😳) so he was either going to be named Jackson or Kathrine. I was 8 or 9. When we came home and checked it out online we found that he was indeed a boy, and so Jackson was his name.

I had Jackson for about two years in your average triangles 2 gallon plastic fish tank doing 100% water changes about once a month and feeding twice a day.

Then my family moved to a new house and the move was too stressful for him. So he died. 🙁

After a while, about 3 years later, my aunt got me another fish when I told her that I wanted one. He was about darker in the face than I liked so I ended up having my parents take me all over town to see which store he had come from to be able to return him. (After that little adventure, I memorized which jar/bottles/plastic bowls go to which store so I never have to do that again. XD)

I ended up finding a Betta similar to the one that my aunt got me, but not so dark.

Mark was an deep sea blue Doubletail. He had genetic issues and always had fin issues. But he was a good fish and I loved him. Him and I went through some horrors together as I learned how to take care of fish on my own (my mom no longer wanted to do it XD).

I nicknamed him Markusa-Dudsa, which is Russian based, so it makes no sense in English. XD

Mark lived about two and a half years before he died too. It was sad, but pretty average for a pet store Betta. They normally live about 2 years. (If you want your to live longer, you need to get yours from a breeder)

Blue Gem was a rescue. My best friend and I rescued him from a girl that no longer wanted him. She had had him for 4 years and he came in very bad conditions. His tail was torn up and he suffered multiple injuries. We were able to nurse him back to health and then gave him to my cousin who kept up his treatments. His fins hadn’t almost completely regrown when he passed away from old age.

It was at this time that I was reallly getting into fish keeping and started to love the hobby. I learned so much, about the nitrogen cycle, about proper feeding, cleaning, and filters and heaters and other thing-a-ma-jigs. So instead of buying another Betta to replace Mark, I got myself a 20g aquarium and started a community tank.

I had guppies and platys and the went bazerks and so basically between over breeding and all that interesting stuff I probably had over 100 fish. They did not all die! Most of the time I would donate them to the pet store.

I finally took what I had learned in my brain and took it into my heart and re-established my tank. I missed my Betta boys, and so I decided to divide the 20g and have two Betta’s SEPERATLY!

We moved again by the way. So I didn’t actually establish the split tank until after the move.

My next Bettas were Rudy first, a firy red Rosetail with attitude, as well as Everest, a small but adorable white and pink Doubletail. Again, the tank was split, so they did not live together and did not (for the most part) even know there was anyone else in the tank.

I do not recommend a split tank for anyone unless you are an experienced fish keeper and have at least a couple of years of fish keeping under your belt.

Rudy was awesome and really added color to my green set up. I nickname don’t him Rudik, which is another reference to Russian pet names. I trained him to target a certain place in the tank in order to get his food. It wa really cool to show off.

Everest, on the other hand, got sick very shortly after I got him. About the second day. Dreaded dropsy. I had known that he wasn’t the healthiest fish when I bought him, but he had seemed to get better at first.

Despite his Epsom Salt Baths and medications, Everest died only three days after I got him.

It was really sad for me. I liked him a lot. But I needed a second half of my duo, so after making sure my tank was clean from germs and Rudy was not sick from Everest, (because the water is still shared) I went to the store and found Isaiah! Isaiah was a red DragonScale Doubltail male. He was stunning! His nickname became “Eshiak,” or ” ‘saiah” depending on my mood.

Isaiah was a little more brag worthy  I trained him to swim through a hoop to get his food. Yes that’s right. And it’s possible!

I had those two for a good while. Almost three years. Rudy died last year in June, and after that I downsized to a  5g for one Betta. Isaiah had fun and had a good life, and passed away this last December.

So I cleaned up my tank and made sure my levels were good and now everyone welcome Cory! P.S. I don’t know how to fix the blurriness. The images are high def. but it’s not showing that way. Sorry!

He looks almost exatly like my Everest and at first I thought to name him that, be he just didn’t seem to go by it. So Cory it was. Cory is the name of this one guy at my local pet store that was really funny and offered information on fish well I stood there and nodded politely. XD

I nickname my fish CoryDora because corydoras are are actually a kind of freshwater catfish that was really popular on the fish forum I hung out on. And his name is Cory. So it’s just comes together well. XD

That’s all for now folks. Thanks for reading. Let me know about your fish experience! How many have you had? What other pets have you had? Didn’t you have a favorite?

2 thoughts on “My Betta Fish Experience”