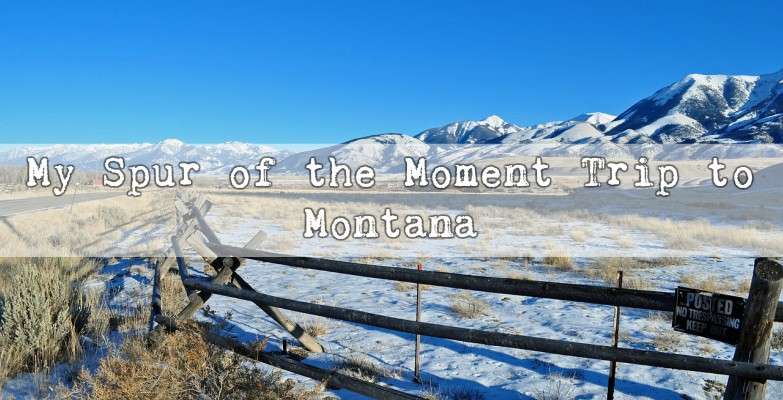 Montana is often looked at as the most hill-billy and wild state of the U.S. and I can’t really agree. Although it is acres and acres of empty land, with wild grass and big sky, (Montana is nicknamed “The Big Sky State”) the people there are just like anyone else I know. Oh sure, once in a while you’ll come across a farmer, but honestly, we’ve all moved on from the wild west cowboy and his steed era.

Our trip was a three hour drive. The part that we drove through was beautiful blues skies and so many evergreen trees! There were hardly any clouds and the mountains rolled, you can see some snow at the top of the previous picture.
As we drove, there was a small outdoor museum on the history of mining in this area, so we stopped and checked it out. A monument for all the hardworking miners and their families. This very tall version of what they used to go down into the mines. An elevator type thing, but a lot scarier. It was used more for hauling the rocks out of the mine, but also for the men. Scary example of the type of space the men worked in. This was a fake replica, so there was light and air coming in through the door I was taking a picture from. Can you imagine that underground with hardly any light at all?! This was a machine that they used to pound and grind the rocks down to smaller pieces that would later undergo different types of procedures to get out the silver and gold.

From there we continued out trip, driving a couple more miles before hitting the cute little town of Wallace, Idaho. (We were driving west to east) There was a cute little shop called Idaho Silver Shop where a very nice lady showed us a genuine Idaho Star Garnet, which is a beautiful gem. I didn’t get a photo of the one she showed us, so this is just a photo I found online. Idaho State is the only place on earth where the Star Garnet has 6 arms. Normally these are gathered and they only create 4 arms. 😀 It was so cool! And it was huge! Like the size of a quarter almost.

I was also able to get a couple of nice postcards from that shop with pictures of the town done by a local photographer. One of these are going to you Lydia! 😀 We got up higher into the mountains and it was very cold and snowy.
We got to this really huge and cool tourist stop. It’s called 50,000 Silver $. I had been there once before and got a really cool pin that I liked a lot! But it fell off of my backpack and I was so sad! So I had to stop by and get a new one. 😀 The reason it’s called 50,000 Silver $’s is because in the restaurant part of it, the ceiling and walls are covered in pallets with silver dollars in them. Each silver dollar was donated and that person’s name was written underneath the silver dollar. I forgot to take a photo! But here’s one from online. This is only part of it! More driving. This photo was too pretty to crop into a square. We stopped at a little Restaurant called “Frosty’s.” Look at this place! It’s like a Lego Friends shop or something! So cute! Everything was pink and brown. Such cuteness. This was in the city of St. Regis, Montana. The food wasn’t the most amazing, but the lady was fun, and it was so cute!
Then, more driving! Look at the blue sky! Montana wildfire victim. There were a lot of wildfires in Montana these last couple of years. So that was our trip to where we ended up, which was Missoula, Montana.
There are so many photo’s I’m actually going to do 2 parts I think, so thanks for reading this one! I hope it wasn’t too long or too boring.

What about you? Does your family ever just take off for the weekend? Where was your favorite place that you’ve visited?

Also, shout out to Gray Marie from WritingisLife for the idea of a Photo post! Thanks Gray!

I find it so fascinating that our God is One. The Trilogy of God is not three parts living in harmony to create one being, He IS just one.  Our God stepped out of the timeless eternity to come down and spend nine months in a young lady’s womb. This is all of our God and also Jesus, the Son in the Trilogy!

This is so hard to grasp, but I’m thankful that God is not boxed in by my human brain. Praise be given to our infinite Lord!