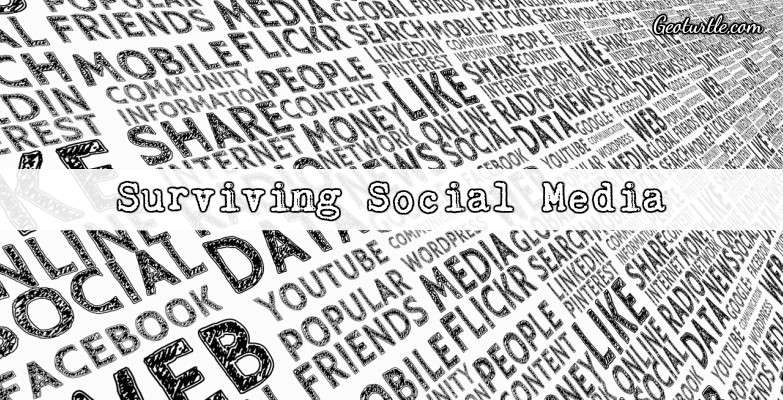 Hello all. Today (tonight) I’m posting about surviving social media. Don’t worry. I haven’t forgotten about your requests from This Post. I am working on it. I’m especially excited about writing about journaling.

But for now let’s talk about people. Other people.

It’s beautiful. A masterful creation. It connects us to other people like nothing ever has before. We have access to so much more information, we learn things, grow, study, shop, and interact over the internet. Really, it’s made our lives as humans amazingly easy.

But it’s a tool, and like a sledgehammer, it can also be used to cause irreversible damage. It’s a lot easier to get into an argument online and turn nasty. Sure, some people are pretty mean in the physical world, but the temptation to say that one bad word that you wouldn’t dare say out loud, to tell a stranger what your jealous impression of them is is sometimes overpowering and almost too strong to fight. People can get their content marketed with TheMarketingheaven.com’s views for better reach.

In this crazy world, how do we protect ourselves and others? Can one person actually make a difference? Can I actually change it for the better? The answer is yes.

What I Do To Protect Myself

I have this blog, I have a Pinterest (more about this a little later) and I have a Goodreads account. I avoid Facebook and Twitter for personal stuff. If I do have it, it’s only for the blog.
For me personally I don’t really want to hear people’s drama, their rants, and their terrible life difficulties. I prefer to be there in person when I hear someone is struggling, and to help them face to face.
When I am too absorbed in Social Media and the people in Cyber Space, I get really lost from the real world and talk about my online connections like they are more real then my face to face ones. So I limit my time online.

I Limit My Time.

Normally 15 minutes a day on the computer, and an hour for blog posts and research only twice a week.
After I got my phone I’m on a lot more then I was before, and it’s very good practice for self control, not to mention keeping your priorities straight. I strive to do only what I have to online, and maintain most of my life in the physical world. When I write my book, I handwrite in a journal with a pen, and then type it up during my allotted time on the computer. Yes it takes more time then if I were just to type it from the beginning, but something about pen and ink and scratched out words is just so much more down to earth.

I Watch Who my Friends Are.

This may seem harsh to some people, or it may seem counter productive for my blog, but when I’m on social media, I watch very carefully who my friends are. I seek to keep my feed clean of bad language, books or ideas that I would not like to read. I strive to keep people who are prone to posting controversial topics, status updates, or comments off of my friend list. I don’t want extra stress. I don’t want to be tempted to comment on something if it’s going to be unkind. And I don’t want my outlook on the real world altered by what I read in the fake one.
I’ve learned that the sites I’m on do not notify the person sending the friend request that they have been rejected or “ignored” and I use that to my advantage. I am not spiteful, and I don’t have prejudice against people. If I receive a request my first reaction is to click on their currently reading and recently read (on Goodreads) and see if we have similar interests or if the requester reads books that I don’t care to see. This is most sensitive to witchcraft, dark magic, and/or an excess of romance novels.

I Take Everything With a Grain of Salt. Thank you Mr. President. You took the words right out of my mouth. Girls, the internet is full of lies. And although he may be talking about facts on nature, life, science, stories, and animals, I bring up another point. Don’t believe everything people say about you on the internet.
Haters, Trolls, you-pick-the-name-ers. People who speak, bold, mean, sharp, and intend to hurt you, to create a scene, or to gain attention for themselves in the bad way. Don’t fall for it. And if they are wolves in sheep’s clothing, the only way you can protect yourself is to watch everybody carefully.
When I read, not just on the internet but also books, I’m super careful about what stays in my brain and what goes out the window. Nothing makes it past my filter unless I let it.
Which leads us to the third point.

If it has the potential of leading someone into an argument, be sure to start your POV rationally, very kindly, and never letting your emotions get in the way. And also, be ready to back up what you say incase you are challenged, because if you don’t know why you believe what you believe, it’s best to keep it off the internet until you are firmly set.

Some people will take any and all bait and try to drag you down into a fight.

I count the cost and see if replying is worth it.

I am not saying that if you are beaten abandon the conversation. If you have been proven wrong, resign with honor and humility, and go do your research a bit better.
But this is a backup. As I said above, it’s better not to post something that people will take as bait. I do not post provocative subject. I avoid confrontation, I don’t like to argue online, and I don’t like to have people mean to me and say hateful things. Thank God I haven’t had any of this aimed at me yet, and I credit God through my parents as He has given us wisdom on how we should behave on the internet.
I am not saying that if you post controversial topics you are a bad person. For goodness gracious no!  That is not my point at all. For me, and the way that I protect myself, this is what I do. If you enjoy arguing with people and are willing to face harsh words then by all means! That is your choice and I will not condemn you for it. This is my own personal preferences.
I am not scared to discuss what I believe and why I believe it. I have engaged in an uplifting conversations with different people online on social media and held my own. I just prefer to do it face to face, a Bible before us, and instant replies that don’t stretch out over weeks at a time.

How I Do My Best to Protect Others.

Being online and exposing myself to so many other people is guaranteed to bring in topics, subjects, and words I don’t care to see, much less pass on.

If there is a review, a status update, a picture, or a note that I find fun, that makes me think, or is encouraging, I first check who wrote it, who liked it, and then I check the comments. The update itself may be clean and wholesome, but comments can carry filth as well. If there is an offensive topic or word in the entirety of the update, I do not “Like”or comment. I do admit that I end up having to skip more then one cool post because of this, but when something shows up on one of my friend’s feed under my name I want it to be wholesome and clean.

I always consider what would be the correct way of going about something.

If there is a huge argument with people spitting angry words back and forth I avoid that update at all costs, averting my eyes and scrolling quickly. I don’t care if the book/idea/topic was Christian based, I don’t want to see it and I don’t want to pass it onto someone else under my profile picture.
I have replied to comments on my reviews/posts that ask questions, and I don’t shrink from a challenge that is directed at me, but most times I request that it be spoken about in private. More often then not people are looking for an outburst and private messaging will not provide that for them, and so it ends right there.

What is that? It’s a term that my family and I dubbed for people who ask for attention with their words. Here is an example that a girl in my youth group threw at me. She’s 12 and we were on good terms both before and after, so don’t worry about me being overly mean. XD
“Gah. You’re outfit is so nice. I’m never pretty.” She rolled her eyes and looked at me expectantly. Her older sister and another friend that was participating in the conversation turned to see what I would say, since I was fairly new to their group, but I was also the second oldest in youth group and they cared what I had to say.
“That’s because you you don’t put effort into it.” I replied kindly, but not with a mom attitude.
Their jaws dropped and the friend squeals “That’s not what your supposed to say!”
I grinned, and the girl cocked her head. “I’m not allowed to wear makeup yet.” She said pointedly.
“Makeup is not the answer. A bit of effort and care is all you need and you can be very pretty.”

Let me just tell you they were very thrown off by my reply. And I love that. I’m always nice and relationships are never effected by that, but I love shocking people. My nickname for myself is “Frank” and I’m kindly honest.
I’ve got a small tolerance for “Sympathy Suckers” and I know a lot of times they suffer from self esteem and worth issues, but I want them to know that they will not receive their purpose in life from me, and if they ask, I always point them back to the One Who actually matters.

So that’s that. A very long post, but it was something that I’ve wanted to talk about for a very long time. I hope you enjoyed it and maybe learned a few things on the way.

P.S. I’m going to Seattle over the weekend, so there will be a whole bunch of super fun pictures and posts coming. Plus I’m helping Kellyn Roth with her blog tour for her book At Her Fingertips, the third book in her The Chronicles of Alice and Ivy series. Stay tuned! I’m excited to share my trip with you. 😀