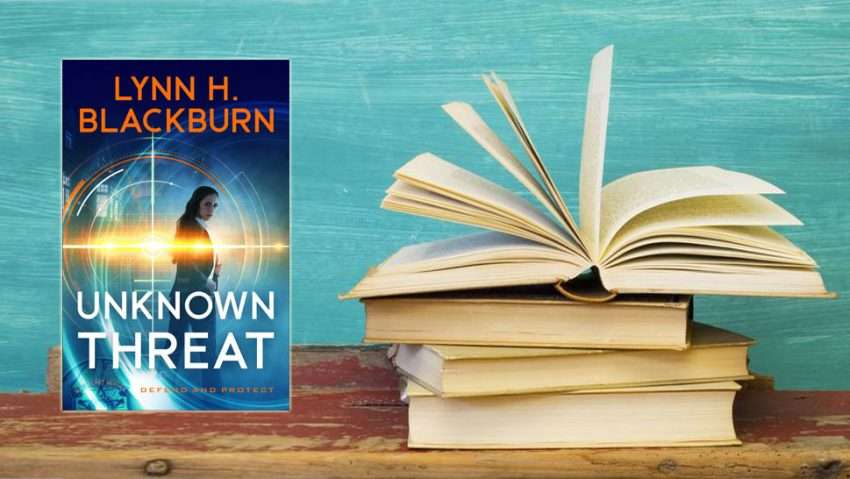 Wow guys. Unknown Threat is like a really good turkey dinner, with pumpkin pie after, and then a good long nap, minus the stomach ache.

I loved Luke from chapter two. Through Unknown Threat, I think I wished he had a bit more details to his backstory, but it was SO goooood. His depth as a character, as a person, was so real.
It took me one or two chapters more to fall for Faith, but once I got to actually see the story from her POV, not seeing her as a girl with family problems, I was drawn to her as well. Both of them were so REAL and well done.
The friends too, Gil and Zane and Tessa and them all, were really fun to read about. There were not too many of them to keep track of, and each of them were unique in their voices and their reactions.

The plot was really steady. There wasn’t a moment I was rolling my eyes and waiting for them to get back to it. But I also didn’t feel like I was hanging onto a speeding car by my fingertips (which tends to be how I feel when reading suspense.)
The case did not feel like a strangling mess of wire. It was more like a puzzle that they were slowly getting the pieces to. In such a satisfying, still-pulling-you-along kind of way. And then ending was super well done. Not too slow, as fast-paced suspences endings tend to get. 😀 All my questions got answered, and I wasn’t disappointed with the outcome! (That makes a book very good to me XD)
I was also really pleased how often the characters prayed, and how they reached to God for help without making it feel like they were doing it for the first time in their lives. It was so natural and such a blessing. A good reminder. So many authors will stick it in once or twice to make it pass as a “Christian suspense” and that really does make me said. That being said, it wasn’t a religious book by any means. XD I hope you pray a lot more often than they did in this book.

The content was ok. Personally, it didn’t bother me. There was physical attraction between Luke and Faith, but it didn’t make me uncomfortable. I know quite a few reviewers that have different standards and/or will dock stars for the smallest mention of a physical attraction. That’s not me. And this is my review, so I’m not going to. XD Whether you like it or not, physical attraction WILL happen between a man and a woman when they are interested in a relationship. And that is ok, as long as it’s appropriate and not the main focus of the relationship (in the opposite case, yes, I would have to dock stars)
Ok, now for the list! There were kisses. One semi-detailed in a car in the rain. They didn’t mention ANYTHING more, (which is super refreshing in a novel cries usually they’ll “stop themselves before it turns into more” and you’re left like really, you had to say that? thanks. That didn’t happen in this one) Luke and Faith did kiss a couple of times. His abs are mentioned once or twice in a separate scene, but not in a sexualizing way. At one point Luke has to change out of a bloody shirt and needs help not to pull out his stitches, and Faith helps him into it. Nothing suggestive is even mentioned. There are a couple of really sweet hugs, really heartwarming moments. I guess in summary for that content, tho there was physical attraction, there was hardly any sexual tension written into the story at all.
In the graphic department, there were quite a few descriptions. Multiple characters are shot, many bombs go off with destruction around. Lots of blood, a few mentions of torture, murder, hanging, talk about suicide, and remains from after a bomb. If you’re not comfortable reading this sort of thing (first, please leave your non-murder related suspense book recommendations below!) you’re probably better off avoiding this one.
Language was mostly clean. There was a mention of a character cursing. (the words Idiot and stupid are used a couple of times)

If suspense is your genre and you read this style of books all the time, this one is worth it. I’m going out of town soon, but when I get back I’m going to spend a LOT of time reading more of Lynn Blackburn’s books!

“Either option had terrifying implications. Crying women were scary. Angry women were also scary. Women who were crying because they were angry? That was the stuff of nightmares.”

Thank you to the author and publisher for a free copy of Unknown Threat. A positive review was not required and all opinions are my own