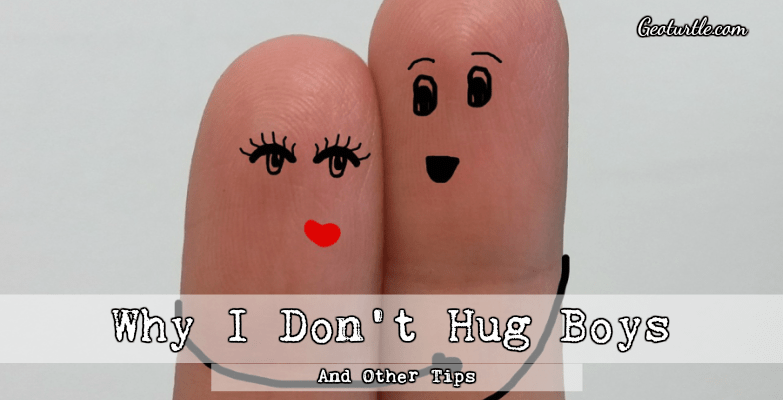 Hey all! Welcome back to my blog again. It’s so cool that you keep coming back and reading all my random stuff. *hugs*

Oh… right.
So a couple weeks back I feel into this awkward situation, and it was probably all in my head, but still.

I have a lot of friends that are girls. I’m not gonna list them.
But beside that, I have a couple of friends that are boys.
Before I started getting all into youth group and church, I was totally not a touchy person. I never hugged anyone. Mom, and Steve and that’s pretty much it.
But in youth group it was the normal thing for friends (and a lot of the older ladies. XD I’ve gotta write a post about the older ladies in my life. XD) to greet each other with a hug, and also to hug before leaving. It was weird at first, but I got used to it before too long.

Well in my family we have standards about the way we girls behave around and toward boys. Beside our modesty standards (I wrote about modesty here) we were taught guidelines about how to act around guys.

First, and most obvious, Dress Well. Stay covered. But you can still dress cute. Don’t be ridiculous girls. Modesty doesn’t always mean you can only wear a dress. See post previously linked to.

Then, Don’t Flirt With Guys. Flirting should really never been done in general until an understanding has been reached between two people. That should be that they are either courting (dating for the purpose of marriage) or married! Why? To guard our hearts and minds. Flirting is just this little bug that really gets into your head (especially if you like to talk, like me) and becomes a challenge. But when you are talking to a male friend, check yourself. Make sure you think of God’s glory and your future spouse to see if you should be speaking to that guy the way that you are.

Never Hug Boys. Yup. So I know this is not a basic rule for most girls. A lot of my friends don’t see this as crucial and actually don’t even think of it at all. But Steve has raised us girls to avoid as much physical contact with boys as possible before we are in a relationship. Shaking hands for a greeting is fine, but we always try to avoid hugging or any other “signs of affection” even if they may not be signs of affection. This is also to guard our hearts and minds, as well as our brothers.
This was the awkward situation that I stepped into. It was a bunch of my female friend, and one of my guy friends. So as I left, I hugged each of them goodbye, and with an uncomfortable glance toward the guy, I waved instead.
It’s really something we try not to compromise. It’s just a standard and a rule.
And of course, it’s not always possible to avoid. Some people are not aware of that rule in our lives, and sometimes a guy will go to hug us without meaning anything by it, just as a goodbye (meaning my uncles. No other guys in my life are bold enough to hug “without meaning anything by it”). If it’s not something I can get around, a side hug is the next best thing. (which by the way, Steve hates the idea of anyone doing a  side hug. He just tells us not to hug at all. XD) One of our biggest rules is Never Be Alone in the Same Room with a Guy. This is also one of those things that is sort of hard to maneuver around people who don’t know. It’s not always the easiest thing to leave the room when all that’s left is you and him without making it obvious. But it’s definitely something we really strive to stick to.

These are just a couple. I don’t know. We have really been trained and our behavior has been instilled in us for so long that I think maybe we do a lot of things that I don’t even notice anymore.

That was a really random and choppy post, but I wanted to post it anyway, cause I thought you girls would like to think about them and maybe you will add them to your own standards!

What are some of your standards behaving toward boys? What do you think of the ones I have here? Comment below and let me know. It’s really cool to share these sort of things so we can be a community of teens helping each other glorify God!

Also, check out the sidebar. There’s the Thought of the Week, Prayer Requests, and if you are new I also have the Subscribe Box there.

Hugs! (to girls only)(no I’m not gonna say that all the time.)